Prior to 9/11, there were no effective systems to monitor the status of foreign visitors in the United States. This vulnerability helped make the 9/11 attacks possible, and the 9/11 Commission suggested that “had the immigration system set a higher bar for determining whether individuals are who or what they claim to be—and ensuring routine consequences for violations—it could have excluded, removed, or come into further contact with several hijackers who did not appear to meet the terms for admitting short-term visitors.” As the former Deputy Assistant Director for National Security Investigations, Robert Schoch helped close this gap in our national security, and as a direct result of his work, U.S. immigration enforcement is now smarter and tougher.

Our federal government has multiple programs to help track visitors such as the Student and Exchange Visitor Information System (SEVIS), which monitors persons entering America on student visas, and the United States Visitor and Immigrant Status Indicator Technology (US-VISIT) program—our system for tracking who enters and exits the country. But the utility of these programs is minimized without a viable enforcement mechanism. Immigration and Customs Enforcement’s Robert Schoch was the architect of that mechanism—the Compliance Enforcement Unit (CEU).

Under Schoch’s design, the CEU analyzes information from ICE’s databases and assigns leads for field investigation concerning those who “overstay” or violate the terms of their admission to the United States. Within the CEU, Schoch established the Threat Analysis Section (TAS), which utilizes advanced technologies to cull through multiple data sources and ensure that high-risk targets are prioritized. This work has directly led to a number of concrete improvements in U.S. immigration enforcement.

For the first time in our nation’s history, immigration officials are identifying, investigating and arresting aliens solely on overstay status.

If a student comes into the United States on a student visa and never enrolls at school or that student changes his major from English to nuclear physics, ICE authorities are now notified.

Connections between several of the hijackers could have been made based on similar backgrounds, shared addresses and common travel itineraries identified from DHS databases. With the Threat Analysis Section, ICE now has the capability to identify these types of connections.

Schoch’s comprehensive design of the CEU included the necessary framework, processes and capability to allow for special operations. For example, following the London terrorist attacks of July 2005, Schoch initiated Operation Secure Commute to focus on threats to our mass transit system. This effort resulted in the completion of more than 300 field investigations leading to the arrest of 70 immigration violators.

Since its inception, the CEU has reviewed more than 200,000 leads using a risk management strategy to identify priorities. These investigations have resulted in the arrest of more than 1,800 high-risk visa violators, including suspected national security threats, murderers and rapists.

As if Robert Schoch’s achievements with the Compliance Enforcement Unit were not impressive enough, it is important to note that he also helped to create the aforementioned US-VISIT program, and his work with the CEU was being done as ICE was being restructured as part of the most massive government reorganization since the establishment of the Department of Defense in 1947.

Robert Schoch’s list of accomplishments looks like a bowl of alphabet soup—CEU, TAS, US-VISIT, ICE. This may be fitting when you consider that Robert Schoch’s is like the BASF of homeland security: he didn’t make many of the programs Americans need to be secure. He used his extraordinary technical and management skills to make them better. 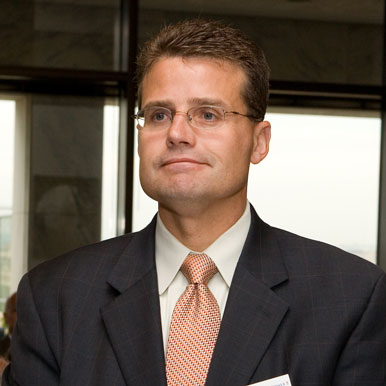